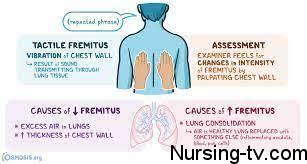 Fremitus is a vibration transmitted through the body.

In common medical usage, it usually refers to assessment of the lungs by either the vibration intensity felt on the chest wall (tactile fremitus) and/or heard by a stethoscope on the chest wall with certain spoken words (vocal fremitus), although there are several other types.

Feeling the vibrations generated from the spoken voice is termed tactile fremitus,

Evaluating speech through the stethoscope is termed vocal fremitus, when a person speaks, the vocal cords create vibrations (vocal fremitus) in the tracheobronchial tree and through the lungs and chest wall, where they can be felt (tactile fremitus).

This is usually assessed with the healthcare provider placing the flat of their palms on the chest wall and then asking a patient to repeat a phrase containing low-frequency vowels such as “blue balloons” or “toys for tots” (the original diphthong used was the German word neunundneunzig but the translation to the English ‘ninety-nine’ was a higher-frequency diphthong and thus not as effective in eliciting).

These signs are most easily appreciated when various areas of lung are compared to each other.

This site uses Akismet to reduce spam. Learn how your comment data is processed.